It’s almost time for the 2019 Nickel City Con! Running May 17 – 19 at the Buffalo Niagara Convention Center, the NCC is a first class Con where fans and families can spend the weekend immersed in their favorite worlds—be it sci-fi, comics, video games, cosplay or collecting. Fans 21+ can even find a tasty libation or two at NCC: that’s where we come in! As the official beer sponsor of NCC for four years running, we’re excited to once again celebrate at the Con and beyond.

Let’s take a closer look at everything happening this weekend involving Community Beer Works and the Nickel City Con!

Find us Next to the Bar

Our Nickel City Con booth is located next to the bar—how convenient! We’ll be there all weekend selling merch like shirts, hats and pins. Plus tickets to NCC events in our taproom (see below). We’ll also have commemorative stainless steel beer cups available for $10. Use it to save $1 off CBW beer all weekend at the Convention Center—and during the After Party in our taproom (we’ll talk about that below)!

Each year we run a contest to let the fans name the official beer of the Nickel City Con. For 2019 you came up with “Wubba Lubba Glug Glug”, a beer that’s as fun to order as it is to drink.

Wubba Lubba Glug Glug is a light New-England style India Pale Ale with a mild sweetness, low bitterness and a honeydew melon / citrusy hop profile coming in at 4.7% ABV. Find it on draft all weekend at the Convention Center and in our taproom. 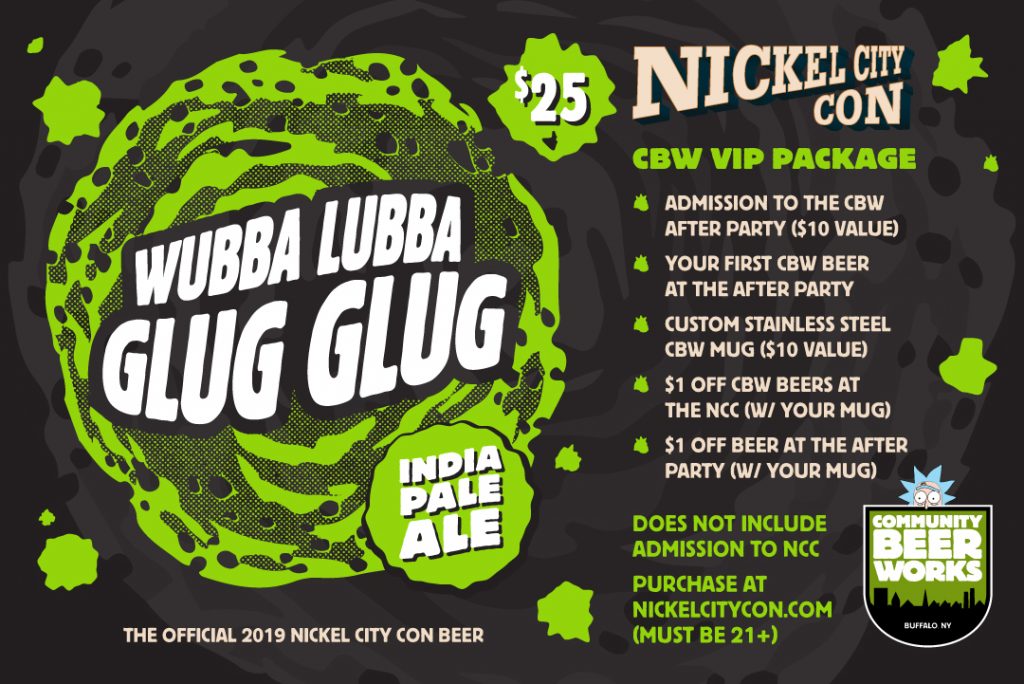 This package DOES NOT include admission to the Nickel City Con. You must be 21+ to attend.

The CBW VIP Package can be purchased online at nickelcitycon.com/tickets. 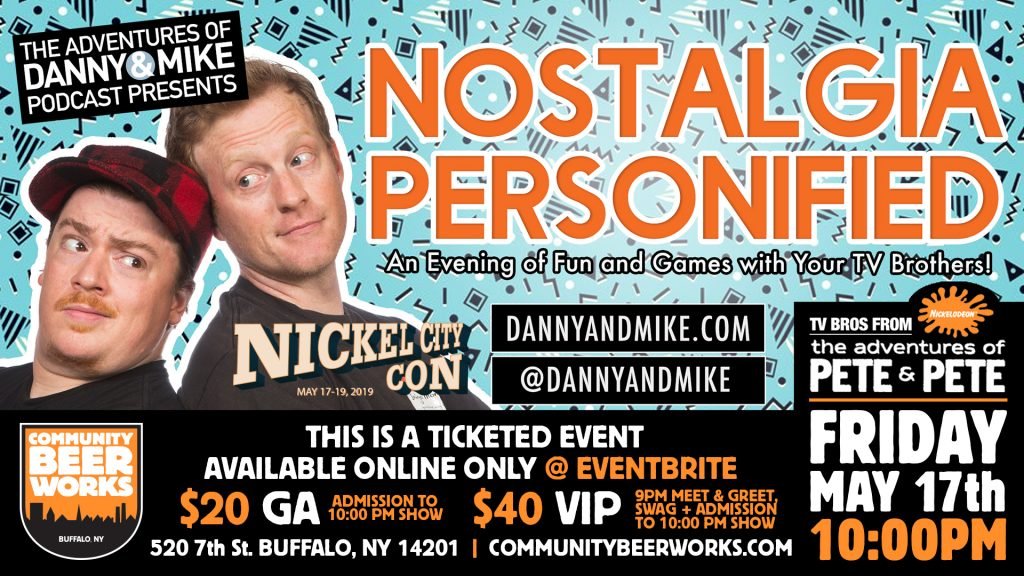 Our honorary guests of the 2019 NCC are Danny Tamberelli and Michael C. Maronna from “The Adventures of Pete & Pete”.

“Pete & Pete” are bringing their unique live show to our Lower West Side taproom. Nostalgia Personified with Nickelodeon’s Pete and Pete is a live interactive journey utilizing audio, visual and on-stage interactions for optimal nostalgia. This 90’s-themed night is both a comedy show and nostalgia trip. The guys will critique some of the old shorts and read some scenes with lucky attendees.

Click here to grab your tickets. Choose between General Admission for $20 or VIP Admission for $40. VIP tickets include admission to the show plus a special meet and greet with Danny and Mike.

Bring your ticket from Friday’s session of Nickel City Con to Misuta Chows for admission to a live drink and draw. Three artists from NCC will draw custom pieces (for commission) on the spot! Plus there will be drink specials and give-a-ways from yours truly. 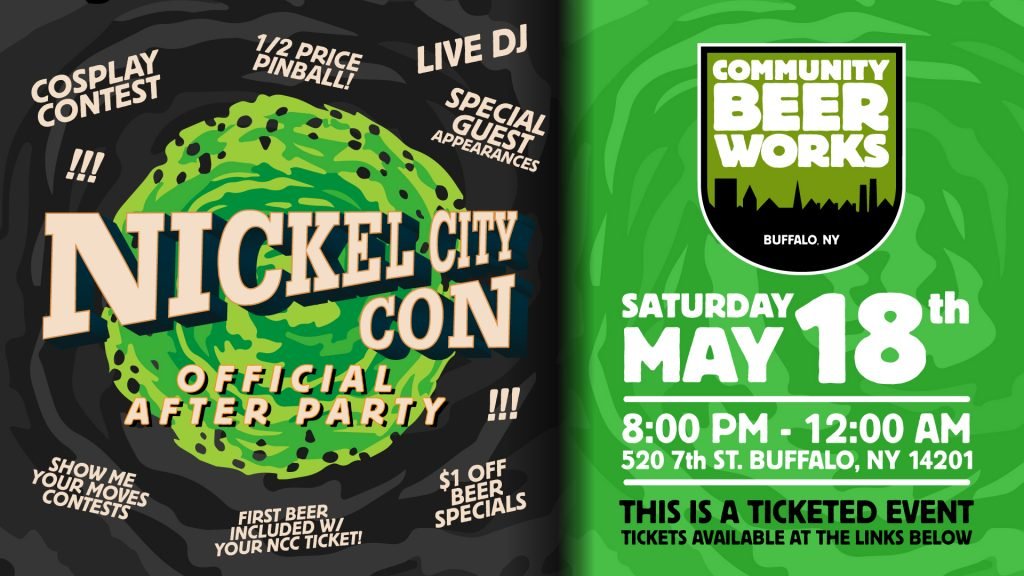 DON’T LET THIS LITERAL CALL TO ADVENTURE GO TO VOICEMAIL

Prizes! Don yourself as your favorite superhero / villian, movie, TV, anime, or comic character to compete for the grand prize! No weapons or auxiliary items will be allowed.

🛸 SHOW ME YOUR MOVES & DANCE FEVER

More Prizes! Dancing + lip sync battle + cosplay = it’s about to get a whole lot weirder, _______ (insert your name here – bonus points if your name is Morty).

So. Many. Prizes. Our Social Media Manager / Cyborg Photographer will be on-hand to snap pics and award prizes for sharing the fun over social media!

We serve drinks for all tastes. Our bar offers a variety of fresh beer plus hard cider, cocktails, and even wine in a can! Our kitchen dishes up barroom favorites with a contemporary touch; Totchos, anyone?

We’ll post updates, news and details over social media as we get closer to the party. Until then it’s the same old story: Just Mortys killing Mortys.

Grab your After Party ticket by clicking here, or stop by our Nickel City Con booth. 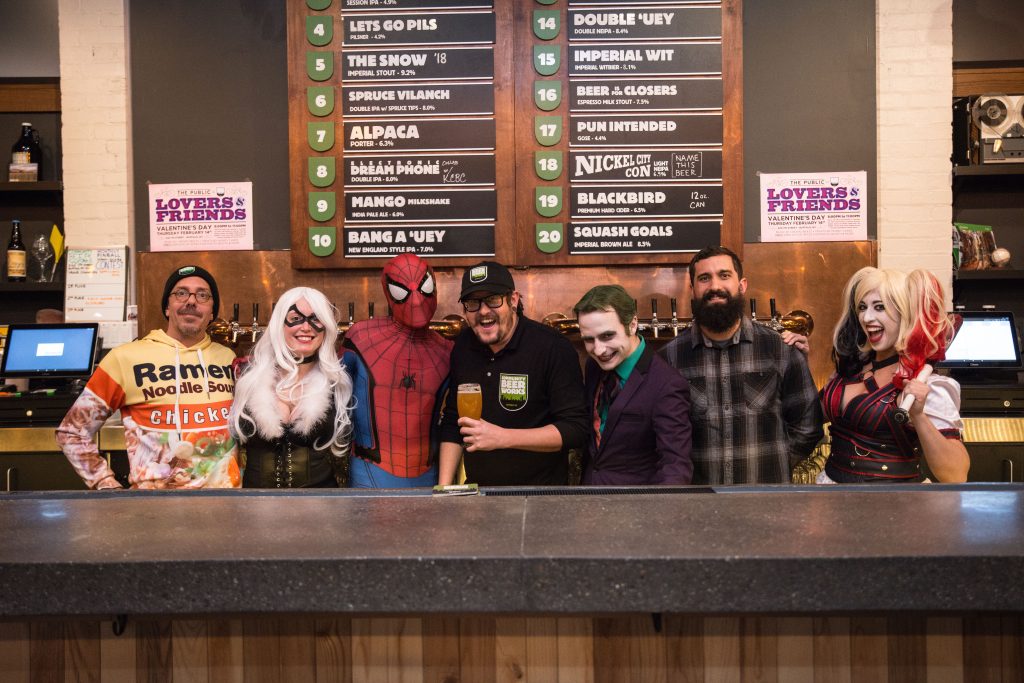 Join us for a weekend of fandom, drinks and nostalgia as we take the 2019 Nickel City Con from the Buffalo Niagara Convention Center to our taproom and back again!