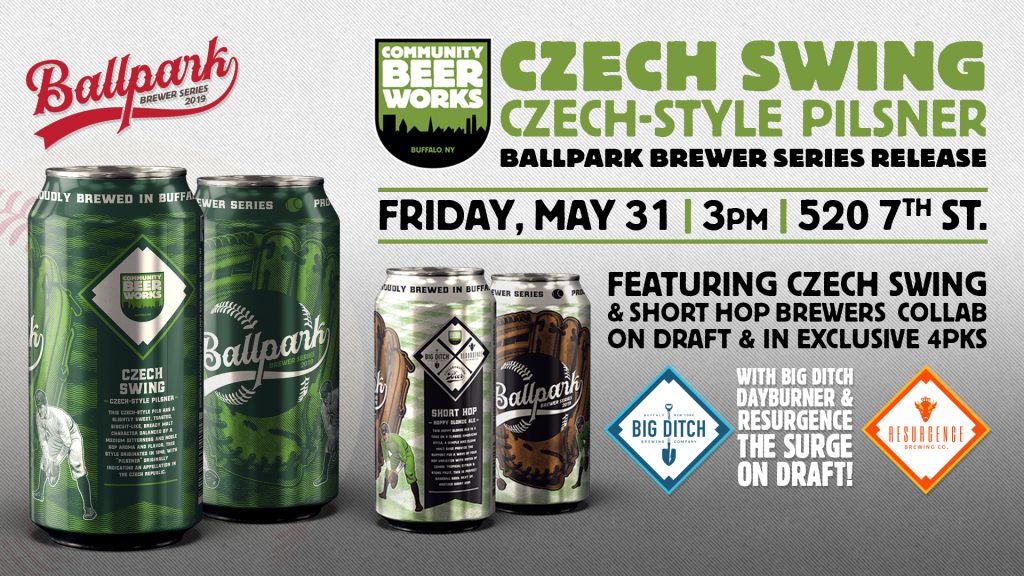 The 2019 #BallparkBrewersSeries will be available in our taproom for the first time this Friday, May 31! Join us for your chance to grab *limited* 16oz four packs of either Czech Swing and/or Short Hop—available exclusively in our taproom. Plus, you can enjoy both beers on draft along with Dayburner IPA from Big Ditch Brewing Company and The Surge IPA from Resurgence Brewing Company.

Czech Swing has a slightly sweet, toasted, biscuit-like, bread malt character balanced by a medium bitterness and Noble hop aroma and flavors. This style was originated in 1842, with “pilsner” originally indicating an appellation in the Czech Republic.

📣 Player fact: Czech Swing is our contribution to the Ballpark Brewers Series and THE FIRST BEER produced using our 20bbl oak Foeder!

This hoppy blonde ale is a take on a classic American style. A simple and clean malt base provide support for a wave of four hop varieties with notes of lemon, tropical citrus and stone fruit. This is perfect baseball beer. Next up—another short hop!

📣 Player fact: Short Hop was produced in our 7th Street brewery in collaboration with Big Ditch and Resurgence for the 2019 Ballpark Brewers Series!

Join us this Friday for your chance to grab exclusive 16oz 4pks of Czech Swing and Short Hop while enjoying all four offerings from the Ballpark Brewers Series on draft!

It’s all happening at 520 7th Street on Buffalo’s Lower West Side.